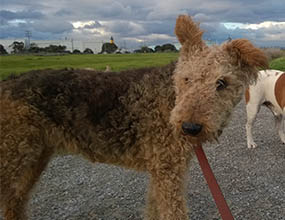 The curious thing about the Airedale terrier it that it is known as the king of terriers (mostly because of its large size) but there is much conjecture as to their hunting abilities. before I get into that I will review the dogs history.

The origins of the Airedale are dark and mysterious indeed. While they are originally descended from the Waterside and Bingley Terriers, which came from the now extinct black-and-tan type terrier, they look nothing like these dogs. The reason being that after these terrier crossings, they were then crossed with the Otter hound for swimming ability and the Manchester Terrier for greater ratter abilities.

All of this might make the Airedale sound like a grand old breed, but like many current dogs and indeed hunting dogs this breed was only stabilized around 150 years ago in the country of York UK.

Their current main name Airedale (though they have other names) comes from Valley of the Aire in Yorkshire in England where they were mainly used as a ratter.

So you might wonder with such a relatively big size for a terrier, why were they wasted on ratting? Why didn’t they go larger game? While they are a small vermin specialize it has been said that they are often used for larger game in the countries of India, Africa & Canada.

How has the dog adapted to being used as a pet so well when many other terriers struggle?

Originally the dog was bred to “run with the hunters” so it wasn’t a sight hound or a major tracking dog. Its primary purpose was to be obedient to their hunter owners until requested to attack small prey. This is a fine line that many terriers struggle with. You will find that some of the best dog hunters are also the most independent (don’t need directions to complete a task) but that can come across as inflexible and difficult to train.

The need to have a companion for hunting rather than lead the hunt, has developed an obedient and friendly dog. The dog was also required to show courage and be versatile particularly being able to switch off and reunite as companion to their families.  Many big game hunting dogs are purposely not socialized and kept away from too much affection and small children in a thought process that it will keep single-minded about its purpose, be a better hunter and more ruthless – but that was not the Airedale’s breeding.

And that said, that was the HUNTING version of the Airedale, today most breed lines of the Airedale are bred to be a lot more passive and have less hunting abilities as they are used mostly as pets.