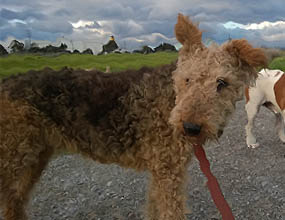 controlling vermin such as a quarry of rats,

In Africa and Canada their hunting abilities extend to helping hunt large game such as: mountain lions, boar and bear.

Previously we have mentioned that they were a great farm general dog, but could also be used for guard and “schutzhund” work. They were also used for search and rescue which makes them one of the most versatile terrier dogs around.

The most curious thing is that they can also be used for herding cattle and livestock. The reason that this is curious is that a hunting dog usually likes to hunt, and can’t always be trusted with minding animals, let alone attacking them.

So the versatility of the Airedale to go from full time hunter or retriever then Minding cattle as a herding dog is very remarkable. Try getting a border collie or kelpie dog to be a full time hunter !

How did the Airedale evolve as a terrier?

The Airedale is a big dog with long legs and is so multipurpose so how did it evolve from some smaller dogs and dogs that were exclusively ratters?

Back in the day with regular hunting being the Airedales major focus, it was regularly used with ‘live holes’ along the riverbank hat housed the network of river rats nests. The hunter would release trained ferrets to chase the large rats from the holes and then the Airedale terrier would pursue the rat through water until it caught and killed it.

The rivers would often be fast flowing, so the Airedale would make great use of its otterhound history swimming skills.

A big non surprising fact about Airedales is that the Airedale can often be difficult to train in companion dog situations.

This is because they still inherently have a lot of the hunting dog in them. It is great that they are considered intelligent and a fast learner, but as any owner of a great hunting dog will know, they can often be considered stubborn if treated with negative reinforcement.

This is the age old misunderstanding with hunting dogs. The better the hunter often the more stubborn they will see to traditional training for domestic situations. These dogs are expected to bring down prey, not ask the owner for permission. The very nature of independence has the flipside of ‘stubbornness’ or not asking for direction/

Along with police work, ambulance work and WW2 work some consider the Airedale to be one of the few terrier breeds that has the ability to babysit young children, without fear of aggression. There are so many conflicting abilities?!

Some consider that the modern day Airedale has been too domesticated and has been superseded by specific prey hunting dogs. While original records will show that the dog can hunt anything, many in the AKC will say that they are not classified as any form of bird hunter at all.

When you say bird dog there are many hunting facets that a dog can take on in the hunting process from stalking and flushing to the end retrieve or kill (if a shot bird is not already dead). However the Airedale mostly is thought to have ability in retrieving birds if considered to be any kind of bird dog.