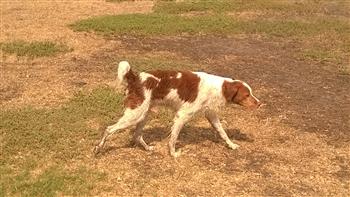 This website is devoted to hunting dogs, and a main part of that will be categorizing the place of each of the breeds within the hunting dog types.

The 4 TYPES OF SETTER Hunting dogs

We have already looked at Pointers and Retriever groups, and now it is the setters turn. Many of the gun dog groups have many breeds in them. The AKC and other large dog classification groups only recognise FOUR setter breeds within the setter category.

The setter dogs are often considered to be similar to pointers, but there are subtle differences. The main prey the setter gun dogs hunt are birds such as Pheasant, quail or grouse.

This is quite an old breed of dog with links back to the 15th century and Spaniel breed dogs in Spain (another type of gun dog).

While there are general hunting dogs or dogs that have a specific prey, the setters are used almost exclusively to point our birds. Essentially the same function as the pointer dog. However in some hunting areas Pointes are trained to hunt, point, flush and even retrieve game.

Setter dog breeds however mainly track prey by scent in a very accurate way then Freeze and indicate (point to the prey). It is interesting that the breeds Pointer and Setter essentially are discussing the same function, but that the breeds can multi task or not, depending on the hunter trainer. The main difference in the pointing, is that Pointer usually stand tall and lift one front leg and bend the paw under in the direction of the prey, while the setters freeze and semi crouch down in a “set” position.

Setters can sometimes be trained to also perform the flushing function on the hunt or work along-side specialist flushers and retrievers (two other types of gun/ sporting dog).

Unlike many tracking dogs like bloodhounds and beagles, the setters track AIRBORNE scents, which means the game must be very recent and moderately close.

We will look at the individual characteristics of each one of the setters in following articles however one of the main hunting aspects is a high excitement over birds. They are also considered an elegant dog in both coat and gait.

In a family environment these dogs are one of the most lovely natured hunting or general dogs you will find. Low aggression and a desire to please humans have had these dogs be readily accepted as companion dogs.