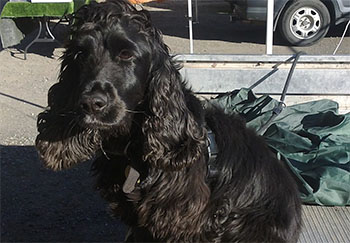 This website is devoted to hunting dogs, and a main part of that will be categorising the place of each of the breeds within the hunting dog types.

The MANY TYPES OF FLUSHING SPANIEL Hunting dogs

Hunters will know that Flushing spaniels and Setters often exhibit similar hunting behaviors (if trained to do so) but look very different and can act quite different in home situations.

The First thing to note about this GUN DOG is that while there are numerous Spaniels, not all are Flushing Spaniels or Hunting dogs (for instance the Cavalier lap dog).

The Spaniel is a dog with a long history and with registration in various clubs around the world, they have managed to keep their gene pool surprisingly clean.

While Spaniels originated in several European countries the Spanish origin seems to be a red herring. From the 9th century Spaniels have been report in Spain, England, France, Ireland and various bordering countries.

This means that the Continental Spaniels look like the typical spaniels (as defined below) BUT  they hunt more like the Setters and Pointer in that they FREEZE and POINT to the prey rather than FLUSHING the prey out then retrieving it (on command). Of course the Continental Spaniels are often trained to retrieve too, but that is not their main function, or original skill required.

Every hunting dog originally had one or two traits bred into them that they specialized at. This was easy hundreds of years ago when hunting was a big thing and dogs were not that expensive to keep.

With hunting becoming a lost art many dog breeds are called upon to do many different hunting tasks from which they were originally bred. The following describes the ideal original hunting training.

Flushing spaniels were originally bred and trained to FLUSH prey (usually birds) from bush and swamp hiding areas for hunters to shoot.

Because of the cold conditions and often the long time between shots, spaniels were required to be of a quiet patient nature, but also asked to be very excited about the prospect of retrieving a fallen bird. This is a major point of differentiation of pup selection for the hunting task.

After a bird was downed, a spaniel is required to MARK where the bird has fallen (keep a mental note) and only retrieve birds from several areas, once the hunter has decided that all the birds are flushed.

Like the Retriever class of gun dog, the Flushing spaniel is also required to retrieve a bird to the hunters hand. Hence all true flushing spaniels are gifted with an exceptionally SOFT MOUTH, that will not bruise the meat.

This is something remarkable that people who own English and American cocker spaniels as companion animals do not fully appreciate. They have a dog that can be trained to an exceptionally high standard to retrieve, have one of the best noses in the dog world, AND have such will power as to retrieve a bird (usually not kill it, even when it is moving in their mouth) and set the bird down at the hunters feet, essentially unmarked by teeth.

What the FLUSHING spaniel hunts

It should be noted that while many hunting dogs can hunt well in open fields and woodlands. It is where the small and robust, with thick coat characteristics of the original flushing spaniels excel. Many briars and marshlands are difficult to negotiate. Larger hunting dogs with more muscle and less finesse often get ripped skin and infections in these environments.

Flushing Spaniels are known for their intelligence, and exceptional affection This plus their small size makes them an ideal family pet around children and other dogs.

But here in lies a big problem for people thinking they have a cute plaything. Spaniels are a hunting dog that require a lot of off lead exercise if they are to keep mentally and physically fit. They have an exceptional nose (second only to the beagle and often used in law enforcement) and a desire to chase prey such as rabbits.

Without draining their energy, flushing spaniel dogs can become ‘lazy’ ‘insipid and people mistake this for low intelligence. What has really happened is that they have dulled a brilliant dog by inaction and their own laziness. A bored cocker spaniel for instance is often known to put on excessive weight and suffer separation anxiety. Walk these dogs, and they will be all that they can be, and you will get a much happier dog, making you happy.

The next article we will look at the various breeds of spaniel.