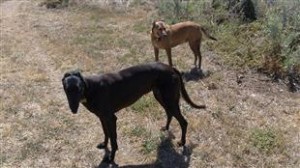 Greyhounds are one of the oldest and longest bred breed of dog in the world. The pharaoh hound being known back to Egypt 3000 years ago. Be aware that the evolution of the dog goes back 20,000 years to the wolf, so there were obviously a lot more generic looking wolf/ domestic dog hybrid breeds between the wolf and breeds we recognize today.

The “sighthounds” / “gazehounds” are dogs that were bred for exceptional eyesight so that they could track prey, even still prey that were located a long distance from the hunter. The category is also known for high speed and agility to hunt as compared to most other dog breeds.

The sight hound share a common LONG skull which by definition has a width of less than 75-80% of the length.

Greyhounds are believed to see up to one mile and have a field of vision up to 270° (20-30 degrees more than most other dog breeds) and much greater than the humans 180 degree field of vision.

Like the greyhound, most sight hounds shapes are built for speed. This means long thin legs and long thin bodies that are aerodynamic and biomechanically geared for high speeds.

That said, varieties like the wolf and deer hound also are blessed with considerable endurance and are more robust, for the bigger game they confront.

If you have a look through the list of sight hounds below, you will see that many of them are known to be ‘stubborn’. That is what they are known as when used as a companion or domestic dog. In hunting terms, the reason they were bred in the first place, these dogs are known as independent.

Stubbornness is a negative term owners use for a dog that isn’t easy to train. YET in hunting terms independence from the owner is of great value when you want a dog to run fast and over relatively long distances to hunt and chase game with very little guidance from their hunter owners.

And this is exactly where these breeds come into problems in urban environments. Greyhounds that have been trained to hunt rabbit or at least run after simulated rabbits on race tracks have a hard time breaking that habit when they retire. Once the chase mechanism has been activated and rewarded, it can be difficult for a dog breed for this exact capability to want to not chase, dogs and anything it considers a good game.

There was an article (research paper) written a few years ago about breeds that could be classified as ancient dog breeds. While many modern day dog breeds are less than 200-300 years old, some of these ancient breeds go back thousands of years. One paper in 2013 suggests that ” 80 percent of dog breeds are modern breeds that evolved in the last few hundred years.”

An ancient breed dog was classified as such by the closeness of its dna to the wolf, its immediate ancestor. It was argued that dogs that are closest to the wolf in dna (not necessarily look) also share more of their behavior and in particular independence.

Note FOUR of these sight hounds fall within the top 15 ancient breed dogs. Starting with the breed closest to the wolf and going less wolf like these are: Basenji, Afghan Hound, Saluki, Irish wolf hound. While the greyhound is believed to be evolved from the pharaoh hound, the greyhound actually comes in at number 17 on this list, and after the four breeds mentioned above.