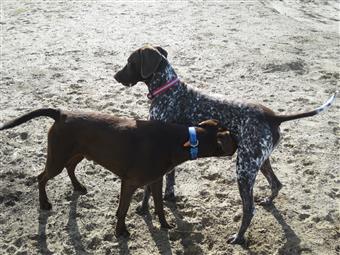 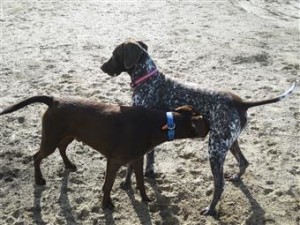 How to satisfy your hunting dog around the home

Many people have hunting dogs as regular companion dogs or domestic dogs around the home, and never intend on training for the hunt or going on a hunt. And that is fine, but here are some tips that you should know.

Most hunting dogs (and most dog in general) have a strong chase mechanism. That is annoying to another dog or person or postman that is being chase, if it is a small dog. It is a potential costly vet visit if a dog bites, or a court case. When the dog is big it can result in more serious injuries of death of a dog or person.

Many people say there are certain dogs that should never taste blood unless you want them to become rabid uncontrollable hunters. The very interesting thing about this is that is very unlikely to happen to almost any dog that is listed on this site as a hunting dog. We do not EVER encourage random inexperience hunting trials that result in inhuman prey being half killed or any person or other dog attacked.

However the truth is that it is often NOT hunting dogs, but big powerful dogs bred for other reasons such as pit bulls and Rottweilers who are most associated in dog bite statistics of the death of humans. I am not meaning to single out these breeds specifically, and many dogs in these breeds are well within safe behavioral control. It is unfortunately however that some breeders and some owners have either intentionally bred aggression into these powerful dogs, or abused these dogs so they have a preference to aggression.

If you have a hunting dog, and they are not generally aggressive (off lead in dog parks) then one way of really satisfying these dogs is to allow them to go to safe places where they can track vermin (not protected species) and either chase (at a distance) or keep tracking scents. The best way for htis is often dog parks where raccoons or rabbits might visit at night time, but vacate the park under fences during the day time when dogs visit.

This is NOT encouraging dogs to become aggressive, but helping them satisfy an urge that they were bred to fulfill. Satisfying a primal dog urge, without the chance of killing or retrieving actual prey can over excite some dogs, but for many it is just the level of satisfaction they need to feel that they have earned their place in your pack.

Dogs are happiest when they feel they serve a purpose, and usually this is by some form of physical task. You can reward your dog with a dog treat after it has been tracking scents in a fenced in dog park, without turning it into a ravenous uncontrolled beast. This is the acceptable halfway house method for people who own hunting dogs in urban environments. It physically and mentally fills an urge the dog has, and has them be much more relaxed and satisfied at home.

Some people will use retrieving a ball over and over in a park, but this generally leads most dogs to being very neurotic dissatisfied and anti social to other dogs that want to greet them. That is not the case with short periods of ball retrieving when there are no other dogs around.

But if ball retrieving is used all the time, dogs can think that is their purpose in life and a dog or another human is just getting in the way, when all the other dog wants to do is play or socialise, at least sniff them.