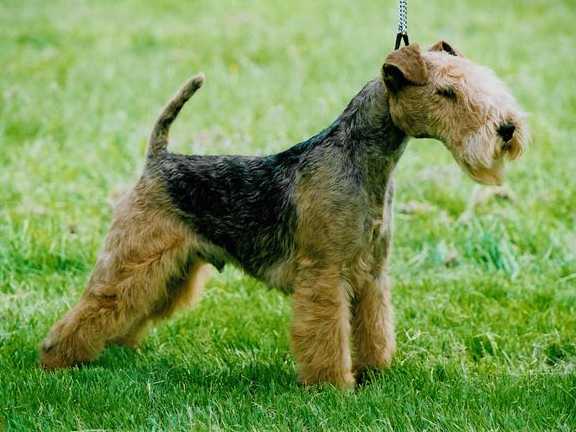 Lakeland Terrier was originally called the Patterdale Terrier the breed is recognised as far back as the 1800’s. It is a small sturdy terrier similar in proportions to the welsh terrier only smaller. Its dominant traits are epic bravery and loyalty.

The Lakeland Terrier is actually a direct cross of the Bedlington Terrier and the Old English Wirehaired Terrier – both from England. Originally it was used as a farm dog to prevent crop and herd loss from vermin and foxes in particular. The Lakeside terrier was a formidable hunter taking on badger, fox and otter across all types of landscape from woods, open fields and water. It would outrun its prey and kill them. While it is now accepted as a companion dog, it is still used in some places as a watchdog, hunting and show dog.

So you may ask why you would take on such a potentially hard core dog. The answer lies in its happy disposition, alertness and affection for adults and children alike. Like any terrier though, these dogs need a strong trainer who sets strong consistent boundaries for the family and Lakeside terrier to remain happy. Along with its early breeding the Lakeside terrier continues to enjoy furious digging and barking, which can manifest itself in separation anxiety, food and toy guarding if not exercised enough and given strong guidelines for behavior.

That said, the Lakeside terrier is a fast learner and eager to please, as long as the owner gives them a set task. Unlike some terriers, the Lakeside is generally good with dogs and pets, particularly if it is introduced to them while young. Coat colours come in: solid blue, liver, red, wheaten and black.

Lakeland terrier grooming: This terrier has a double coat with the outside one being hard and wiry while the undercoat is much softer. This setup required plucking 2-3 times a year to remove dead hair and thin the coat out. For good healthy they also require regular ear plucking and trimming between the pads of the feet. The traditional cut is to keep the hair longer on the legs and their muzzle.