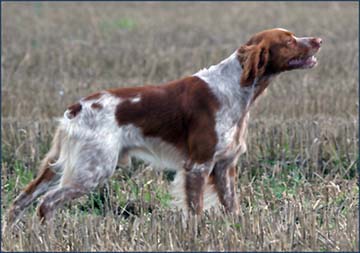 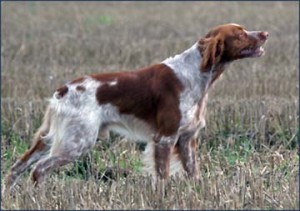 The brittany spaniel is considered by hunters and like to be an exceptional bird hunting dog. The bird hunter owners know this from their performance, and the general population may not have heard of the breed, so the fact that it is still around means that if its not a mainly domestic dog, it has to serve a genuine work function to survive.

In these articles about gun and hunting dogs and in this case a working dog, we will concentrate on their origins and hunting abilities. The origins are unclear but it is believed this French dog (after Brittany the town) was a result of a white setter and another French do or possible a Welsh springer spaniel that it looks a lot like.

Resistance to cold and wet conditions makes them ideal for swampy cold bird hunting. They are mainly recognised as a bird dog POINTER with massive stamina. Their great gentle (but excitable) personality makes them an ideal companion dog if taken for several long off lead dog walks that involve much running. In a lot of ways, including looks, these dogs are similar to springer spaniels.

Given the above information it should be no surprise that these dogs are classified in the sporting group by most kennel clubs, which is equivalent to the gun dog section for hunters. While the last name suggest they are a spaniel, their hunting style is often more akin to pointers and setters. And while they are clearly a bird dog, they are also in the water dog class of dogs (including webbing between the toes).

The thing that separates this hunting dog from many other is that it can hunt (locate by scent), point to the location, and retrieve when the bird is downed. They do not have to be forced to learn each trait, as all of these hunting skills seemed to be inherent in the breed.

This gentle nature and great desire to finish a bird retrieve makes them one of the most prized bird hunting dogs around. Being highly intelligent and trainable also means they need an owner / hunter who is able to give stable regular leadership, otherwise these dogs can become timid or anxious – the last thing you want in a hunting context. In America they are just known as A brittany – however it is instructive to remember their roots by using the spaniel after the name.

If you are after a perfect bird hunting dog then the spaniel is very close to it, if yo9u are after a great companion dog, the same goes, as long as you can vigorously exercise it and keep its mind occupied each day – not an easy task for working (9-5 professional) people.