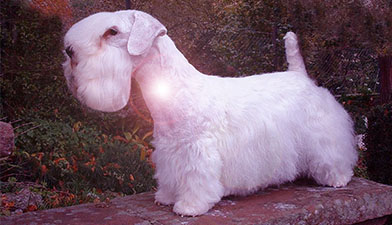 The Sealyham terrier was created in the UK and was bred to hunt badger, fox and otter. This was because ONE person developed the bred (Captain John Edwards of Wales), and this is what he had on his property to dispose of. The names comes from the name of Edwards’ estate, which was Sealy Ham.

All terriers were originally bred for terriers that are known for their speed and agility. and often to hunt smaller game. That is why rats and weasels were also hunted but of course they could hunt any small vermin in any country they were brought to.

The dogs are reknown for great stamina and courage and its fiery and feisty nature is perfect for fihting off aggressive vermin as it will chase as easily as attack anything that is up to its size and even a little bigger.

Like many of its terrier kin, it ia aslo an exceptional digger wiht the ability to dig out its prey and attack underground if necessary (this assumes that the hole is large enough- otherwise ferrets were typically used).

The dog is exceptionally quick in digging as well as battling underground to get its quarry.

Now days as you can see from the image in this article the sealyham is more of a groomed show dog than a hunter in many cases … and if bred to have a milder temperament making it easier to training and less aggressive, the breed is still very good at hunting rabbits and more passive vermin (compared to badgers and otters).

Their double coat that is soft near the skin for warmth and wiry on top to protect against harsh bushes in the hunt and digging underground also gives them great protection in many cold weather environments.

Many non hunting owners (often rescuing the dog) will consider their small size, gentle nature and good looks to mean they will make an exceptional companion animal. Be aware that this dog was bred from several other hunting dog breeds to create a perfect vermin exterminator. When bored they will dig and try and escape. Their terrier hunting class means they were bred to be feisty and independent making training a little more challenging. As they are born to chase animals and kill, leaving them a lone with cats or even sometimes children can be something that needs a little more thought.

They make a loyal and great dog, and once their hunting instinct is suppressed, and they are daily exercised, they can make a great family companion – just don’t disrespected the history.