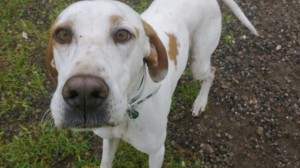 This is the dog with the classic hound look. When hunters say pointer they are often referring to the ” English Pointer”. Though there are German, Italian and a whole host of sub pointer categories, each with a slight tweak in abilities. The English pointers are known back to the early 1700’s

Like many other dog breeds, the origins of this breed are many. That is it is believed to have been created by breeding of the following breeds: Italian Pointer, Spanish Pointers, Foxhound, Greyhound, Bloodhound, Newfoundland, Bulldog, Setting spaniel.

The places that these dogs were most prevalent in are: Spain, Portugal, Eastern Europe, and UK. Originally they were used to ‘trace’ hares, bird pointing and the sport of wing-shooting (popular in the 1700s).

The pointers abilities are remarkable and show a very specific characteristic taht breeders chose to create in the dogs. Everyone knows that pointers ‘point’ with a raised leg and knee showing a vector towards the prey, but few know that this was trained into the dog to act as a guide to show Greyhounds where the hare were hiding.

It is remarkable that the pointer fulfilled this action considering that the greyhound relies strongly on its vision (rather than scent like most dogs). Thus used in conjunction the pointer and the greyhound created a formidable hunting aid (well at least before high powered and long distance guns were created).

Since the advent of guns in hunting the pointers have been used to cover large amounts of ground very quickly  and flush out birds.

The apparent limitation of this breed is that unlike Labradors and golden retrievers, English Pointers are not typically water dogs. They can run into water, and swim somewhat, but they are never as comfortable as dogs bred to be constantly in water.

The pointers are rarely trained to retrieve the kill. Of course a hunter can train a dog to perform all parts of the hunt, its just that they are not a specialist at the final aspects of hunting.

It should also be noted that the English Pointer is a warm weather dog and due to its thin coat and low fat content they do not perform well in cold climates or cold water.

I have met many pointers out on hunts and like many hounds of a similar size and look they are often quite sociable with pleasant dispositions. On the job they are as focused as any hunting dog, but this ability to switch into home mode has made them quite a favored domestic dog.

The caveat with this is of course like all hunting dogs, a large amount of exercise is required to burn their energy, otherwise they can become quite ‘edgy’ bored and ‘non compliant’.