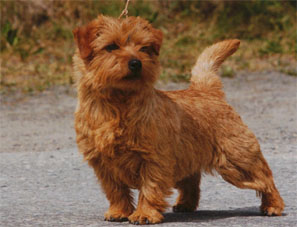 Like many terriers, the Norfolk terrier was created in East Anglia, England.

One of the most confusing thing about this terrier is the origin of its name.

Norfolk Terriers have been known by different names over the years:

Note the Norfolk terrier and the Norwich terrier were both considered slightly different versions of the Norwich Terrier. The only discernible difference was in their EAR TYPE! So the powers that be decided (in UK in 1964) that rather than keep only one ear type, or to allow two types (apparently bad for dog shows) they would classify the Norfolk terrier as a new breed.

Norfolk Terrier & Norwich Terrier grooming: They have a single thick waterproof coat. It is wiry and straight and grows from 2 to 5 cm long. Coat colors are tan, black, red, wheaten, grizzle with or without dark points.

While the coat rarely needs to be clipped it does need daily brushing and combing to keep it tangle free. Shampoo only when quite dirty as this will remove the oils that give it the waterproof effect.

Note that these terriers are light shedders.  That is often the main reason that urban families get this dog.