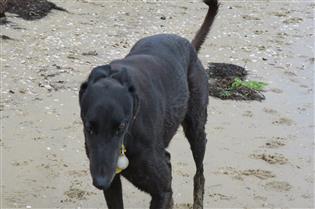 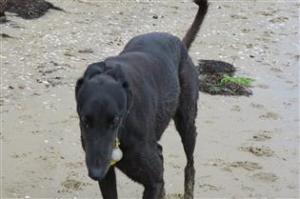 The hounds are one of the more obvious and pronounced hunting dog groups. The AKC lists 29 dogs that make up this breed, but many sites will show many more dog breeds.

The Hunting dog group HOUND is generally divided into two main groups and a smaller subset. The two main groups are sight hound and scent hound, with the much smaller cross breed group of lurchers.

Site hounds a dog breeds defined in this group because of their preference to define prey visually and alert their hunters. Similarly Scent hounds track predominantly by scent and have a much keener nose than dogs not included in the hunting group. All dogs in these sub-categories were originally purpose bred for hunting work, they were not accidently evolved.

The lurcher is a less defined cross of (usually) the greyhound (site hound) and often a terrier or other hound (such as wolf hound or elk hound). They are bred for specific environments and often a specific game.

One easy way to tell if a dog belongs to the hound group is if it has the word hound in its name such as afghan hound or bloodhound. But many breeds have dropped the hound suffix such as the basenji and the beagle.

Most people take the AKC ruling of where a dog breed should be categorized but this strict categorization doesn’t allow for the many sub breeds out there that are often a country or province variation of the main breed. Examples abound in the scent hound breed where some sites suggest there are fifty or more of this type of hound alone, and the AKC limit it to less than twenty.

For instance some country/ regional hounds that are missing from the AKC list just in the HOUND suffix category alone (of the total hound group) are:

These dogs can have considerable difference in look and usually very different prey that they hunt (local prey). However they are not recognized by the AKC, so they are usually not bred in America or have a huge presence in America as hunting or companion dogs.

Curiously FIVE of the SIX varieties of COON HOUND are found on the AKC list. These dogs are a relatively recent and small niche of the hound dog category. They are the: American English Coonhound, Black and Tan Coonhound, Bluetick Coonhound, Redbone Coonhound, Treeing Walker Coonhound (the Plott Hound is just known as Plott on the AKC site).

Lurcher hounds are NOT recognized by any major kennel club, however they can be quite prevalent in given hunting regions. The remarkable thing about this is that the Coon hound is an American invention, not used widely in many other parts of the world, but lurchers have had great success in many parts of American and other countries.

The reason for lurchers not being recognized is an administration issue as much as it is breeders deciding to settle on specific physical and hunting characteristics.

Lurchers are usually the result of breeding a greyhound and a terrier or other larger hound such as wolf hound, elk etc. More detailed information on the lurcher is given in the Lurcher article section.

More details will be provided on the three sub categories of the HOUND DOG (site, scent and Lurcher) in future articles on this site !