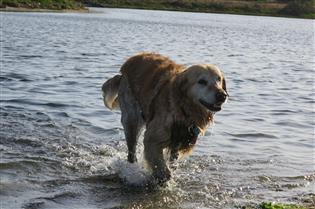 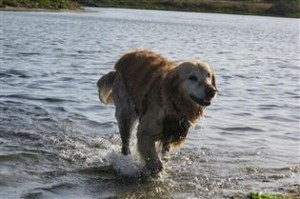 The gun dogs are a major sub group of hunting dogs they are comprised mainly of:

Some sites will group these dog groups into smaller or larger groups or class them as part of the ‘sporting group’ of dogs. The main thing that binds all of these breeds together is that they are used by humans who are hunting animals and primarily shoot animals for game (mostly birds and small animals).

The dogs main function is to assist in either identifying the game (pointers) or retrieving the fallen game (shot, alive or dead).

While this may seem vague, there are many other groups discussed and defined on this hunting dog site that perform hunting activities for their owners that are not primarily involved with showing the prey (pointers) or retrieving the game (retriever, setters, spaniels and water-dogs).

For instance scent dogs track unseen animals and the hunter follows behind until the animal is found, then they take over. Sight hounds visually find animals over long distances and then run to the game and hold (and or kill) it until the hunter catches up.

Because the gun dog is meant to retrieve mostly dead game, and leave it in clean unmarked (except for bullet holes) condition, the gun dog is often found to have a soft mouth, be social and potentially a better companion dog than other classes of hunting dog – particularly those bred to kill.

There are many sites that sell gun dog puppies or train gun dogs. In fact most websites for gun dogs are based around these two facets, rather than what is in the best interests of the dog.

One major differentiation you will find about gun dogs (besides the lavish use of gun dog terminology) is that they are trained from a young age to be patient, controlled and pay great attention to where a downed bird is (sometimes having to retrieve it hours after it has been shot).

The very nature of these breeds and the training (making them calm and less aggressive) is the opposite to many hunting dogs that are bred to be muscular and aggressive to bring down and kill big game by themselves, showing no fear and having maximum independence.

Just as many trainers say it is bad to give too much affection to a large game hunting dog that kills, the goal of most gun dogs is to have them as social and affectionate to humans and dogs alike, while still remaining focused on the job at hand when hunting.

The last thing you want to do is have gun dogs having fights with other gun dogs, or eating the game (rather than calmly retrieving it).

And like any dog on earth these dogs require proper socialization, nutrition, discipline and exercise. The discipline is primary in training, but without adequate socialization and general health a hunting dog cannot maintain its fitness to retrieve in difficult conditions for long.

In this introductory article I will not go into depth the training required of this group, as that would make the article too long and it would be too generic.

Suffice to say that future articles will take care of such specific training needs of specific breeds within the gun dog group.

While you may raise a gun dog in a home environment, just as many fine working dogs like border collies often become part of the family after working hours, it is useful to note that as puppies these GUN dogs require all of the regular nurturing that any dog does.

Typically gun dogs need house training, learning what they can and can’t chew, recall, sit and stay etc. The one extra thing they might be exposed to as a young dog (not puppy per se) is objects that can potentially frighten them or distract them, so that they become desensitized (to distractions and gun shot noises) and pay more attention to the owner, hunter.

Some gun dog hunters find this (puppy) period one of the more difficult periods to manage. Many gun dogs like cocker spaniels can be quite sensitive dogs when puppies and adults, and harsh tones of voice or large truck exposure too early in life without the dog feeling secure, can lead to timidness and break the dog as a good gun dog.

A good gun dog owner knows that a dog is a sentient being well above just being a tool used for hunting. They become a friend, part of the team and part of the family.

Like all good training, of any kind of dog, making the training seem like a game, something pleasurable that has a positive reward for the right behavior or outcome really accelerates training and makes for a happy dog as they feel useful in having performed what you want them to.

Dogs did not evolve from wolves and cohabit with humans to live in isolation, they poses the very rare ability to want to do this, to become domesticated, so it is our task to allow them to feel wanted by completing tasks they believe we value, as well as allowing them plenty of non hunting time to explore areas.