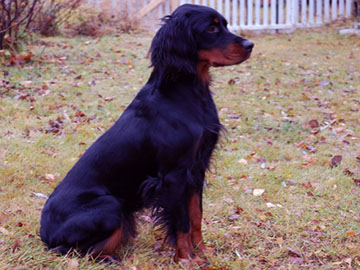 For those of you not in hunting circles or in fact many people in the general population, the Gordon Setter might be indistinguishable from the regular cocker spaniel or many other similar spaniels. There appears to be a look of king charles cavalier spaniel in there too. They come in either wavy or straight coats and the Gordon Setter is the ONLY setter that has black and tan markings.

Before understanding its hunting skills it is always worthwhile knowing where a dogs source breeds came from.

The Gordon Setter is said to have been created in Scotland UK, in the 17th century making it a particularly well defined breed now.

While the Gorden setter looks like a cocker spaniel, it is indeed part of the setter family (ie also included with Irish Setter and the English Setter).

It is believed that the Gorden Setter was one of the FIRST setters and developed from a Land Spaniel as opposed to a water spaniel. Breeding methods of the last few centuries have changed considerably as far as account and record keeping go, and it is believed some pointers and hounds were also bred into the Gorden setter.

So with this general confusion and obscuration, it is worth looking at how the dog is used to hunt.

The Gorden setter is known as a BIRD DOG with exceptional smell. The setter was trained and bred to ‘point’ toward the fallen bird, retrieve it and return it to hunter in pristine conditions. the dog has great intelligence and is robust with great stamina with the ability to hunt in bad weather on water and land.

The reason it fell out of favor a few centuries ago was that hunters were after faster larger animals and that mean the pointers gained favor.

Of course the Gorden setter has some advantages over the pointer. Assuming they can carry the game (the birds are not too large or water too swampy) the Gorden is a great one hunter, all purpose bird hunting dog. They can withstand the cold much better than the pointers and many thin coated dogs, and because they are much more squat, they are prone to much less leg injuries. Their thick coat allows them to run through rugged brush without as much danger of ripping skin, as can happen to pointers and many thin coated dogs.

A snap shot of the types of birds they were originally designed to hunt is: partridge (grouse), pheasant, snipe (woodcock, quail, guinea fowl.

Gorden Setter as a domestic dog

Knowing that this was a purpose bred bird dog with exceptional stamina should not make it a surprise that they need a lot of exercise per day. One hour for minimum maintenance up to 2-3 hours if you want a fit and happy dog.

Having a strong scent and prey drives these pretty and intelligent dogs easily revert to their hunting origins making it difficult for inexperienced owners and dog trainers to maintain control of the dogs. These dogs are great in families, but again prey drive may make being with other small animals such as cats and guinea pigs problematic.

As you can see this is a purpose built dog that seems to have fallen by the way side in some parts as flashier larger dogs have taken over, but they still have a great niche in the small bird hunting field.