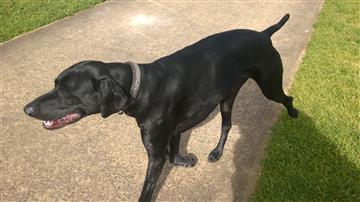 I know what you are thinking, what’s a dog obsessed Texan trainer doing talking about German dogs for ? Either that, or was it five shots or six. But I should tell you that I dont care where dogs come from or what environment they were designed to hunt in, they are all fascinating.

And the German Short-haired Pointer is so fascinating that most people just call them GSP’s !

History wise the AKC say that most likely the GSP is descended from the ” German Bird Dog”, which was related to the old Spanish pointer back in the 16 hundreds. Other German hounds and English pointer are likely to have been involved in the GSP development meaning that people shouldn’t be so precious aobut any ‘pure’ breed dog. Only in the last 50 years or so has the breed really been properly regulated, but again that is up to the skill and the integrity of each breeder.

Some purists believe the GSP to be the perfect gun dog (or sporting dog according to AKC). they can perform almost all ‘passive’ hunting activities from being a pointer to a retriever. They can also find and track upland birds and waterfowl (making them a preferred bird dog too). On the ground tehy are also very well versed at tracking and catching rabbits, raccoons, and deer.

The main issue that novice hunters can have is that these dogs can seemingly enjoy their work a little too much. Their high endurance and eagerness needs to be tempered with discipline and recall abilities. The gsp loves the hunt and will do anything to gets its prey, meaning that the hunter also needs to guide their dog as to what is acceptable to chase and to bring back game as unmarked as possible.

The German short haired pointers webbed feet and water-resistant coat, make them also a great “water dog” meaning that in the GSP you have an expert hunting dog, that can run for long periods, swim well and is a Gun dog and water dog.

The main libations for this dog is that with long legs they can have bone and knee injuries when running through bush and scrub-land with many hole in the ground. Their short coat is great for working in hot environments (such as Texas and the US southern states) but the cold can adversely affect this dog. Noting that while they did descend from German (where it can often snow in winter) the GSP needs to keep active to keep warm. Thus they don’t do well as bird dogs sitting still in hidden blinds for long periods in cold weather waiting for hours for their owner to shoot a bird.

Also with a thin coat comes the issue of getting its skin ripped on branches and other debris. Skin and leg issues in swampy or unstable ground environments (particularly when they love to run at high speed), are the major downsides for this hunting dog.

German Short-haired Pointers around the home

All sporting dogs requires a lot of exercise and space to run but that is usually taken care of when they live as a hunting dog. If you own a GSPs you will soon discover that they have unlimited energy and without personal attention (human interaction and dog socialization) they can bark, and become destructive.

Nothing turns a fun loving well behaved GSP into an uncontrollable rebel like lack of exercise and contact with humans and dogs. Expect to be out for several hours per day with your GSP off lead if you want to get the best personality out of your GSP.