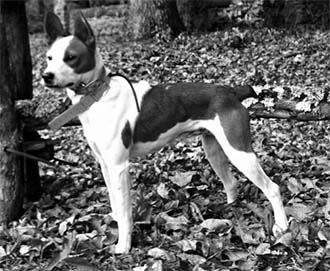 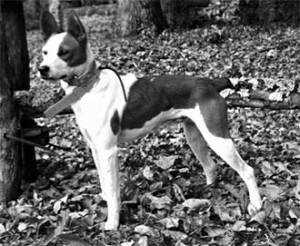 Part one of this article describes many of the common features of the Feist dog. A great little hunter similar in look to a jack russell, but a TYPE of dog, not a single BREED. They are very high energy and TREE their target game, rather than running them to ground.

Because of the similarity of the Feist to the Jack Russell it is very instructive to see point by point what the actual differences are. The major complication her is that many jack russells you see are actually Fox Terrier Crosses. There are big differences in hunting style and shape of head etc, but one of the easier tells is often that the jack russell is a much smaller dog and its head is not as square at the front (long but rounder nose).

Because the Feist is has often been mistaken for the smooth coat jack russell and most people know what a jack russell or at least jack russel X Fox terrier looks and acts like, it is often instructional to know the differences between these two breeds.

FEISTS as companion animals & behavior around the family.

Both Feists and jack russells are known to make great family pets, even those used for hunting. They can separate out their behavior around the children and other family dogs, but sometimes have issues with cats and non canine animals.

They are very alert, intelligent, tenacious, powerful dogs, proving a great watch dog with excellent guarding capabilities but all of this energy has to go somewhere if they are not used regularly for hunting.

The feist can be very protective of the children in its family, so beware around other children playing with your children when your feist is off lead.

And this is the shame when Feists are kept as pets and not socialised or trained to behave off lead. Not given regular walks to redirect energy, the feist suffers similar issues to jack russells and fox terriers kept as pets. They can develop anxieties and aggression towards other dogs.

Their amazing energy and hunt instinct means they don’t get bored, they just escape the house and yard. They can mark territory in the house and bark until they get what they want. They have centuries of breeding in them to find and get small prey, so it is natural that this instinct must have a healthy outlet, not suppression.