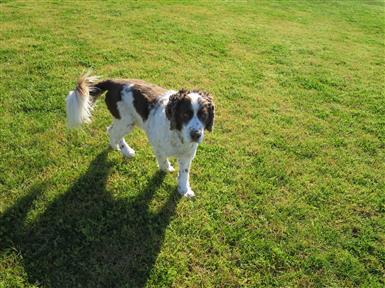 Because American dogs and larger dogs are often used in hunting in America, the English breed dogs are not as well known in many parts.

So the following list of hunting dogs might not seem as impressive – but considering that they are hunting dogs the fact that these dogs CAME from the springer is impressive:

As the founder of ALL the English hunting spaniels the English springer spaniel has a strong temperament and hunting style level of importance for all these breeds.

Many centuries old, the above list does not rell the full story. The ENGLISH COCKER spaniel has the same dna as the English springer spaniel and the original difference between them, born in the same litter was purely their size.

As kennel clubs got involved it was decided that the larger ones would be called springer and the smaller ones cocker spaniels – as they were mostly used for hunting the woodcock bird.

Both spaniels can flush and are excellent retrievers, but the springer was used more to Spring onto the game with great athleticism making the birds fly out erratically into the line of fire.

The main areas the springer is used are:

But this does not tell the story of why the dogs are still so popular in hunting.

It is one of the most versatile hunting dogs around (in passive hunting ie not killing) and one of the most easy going dogs (great personality) but are known for massive excitement once in the field.

But because of the easy going nature, easy to train (with positive reinforcement and treats) the dogs become a great companion on the hunting trips too. In fact the only issue in training and in the field seems to be slowing the dog down, tempering their excitement.

Note these are not the largest retrievers so retrieving geese or other large water birds can present problems and dangers if the birds are only winged and the dog has gone a long distance to retrieve.

AT HOME WITH THE SPRINGER

As these dogs are so high energy and love to chase birds, rabbits and anything as a game, you will need to walk these dogs daily and keep them social. There preference is to be around birds, but dogs and humans are a close second.

A brilliant family dog (as is the English cocker spaniel) but both do have some issues with separation anxiety if their energy is not sufficiently drained. They will go to the end of the earth to please their owner, so it is only right that their owners put the same daily effort into these amazing dogs.