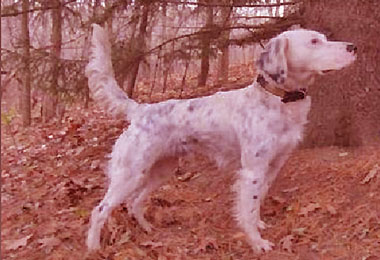 Here is a secret admission of mine – I have not personally worked with the English Setter before ! if you dont know what one looks like, then its a fair chance that very few people keep these as pets or domestic dogs, so the breed is still principally bred as a working GUN DOG !

First developed in France in the 1500’s, from the French pointer and the Spanish pointer and called Setting Spaniels (setting for setting the birds and spaniel because of Spain).

The dogs obviously still retain the Setting part in their name, the concept of crouching down to indicate that they have found the game. Ironic in that their original stock stood upright and pointed with one bent leg in the direction of the game birds.

It was only after bringing the Setter to the UK that adding a French hunting dog to the mix did the dog transition from French and Spanish to a UK developed dog. It was during this time that the crouch (setting) was bred out of the dog in preference of sitting in the direction (much easier to see from a distance without binoculars).

This breed of dog is described as “strong-willed” which really means independent and bred to make its own hunt choices without as much reference to its owner. They are only a medium sized dog but their combination of endurance and athleticism (not necessarily speed) makes for a formidable hunter.

The original bird quarry were: quail, pheasant, grouse. One more unusual part of its hunting is that it uses airborne scent of its prey (holding its head up high while sampling the air) rather than ground tracking as used by spaniels.

This dogs intelligence and independence can actually be a negative for inexperienced owners. These are people orientated dogs that need people who are dog centric to give discipline and exerciser regularly. They are working dogs and are always happiest doing a job. So if they are not hunting, work must be invented for them.

Up to 2 to 3 hours of exercise PER DAY is required to get the best out of these dogs, even as a domestic home dog.

These dogs are gentle, great with kids but they are not easy to train, because of their strong bird instinct distracting them when being trained outdoors. Note over 10% of English setters have congenital deafness and hip dysplasia. is also relatively common.