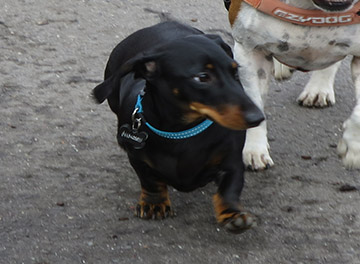 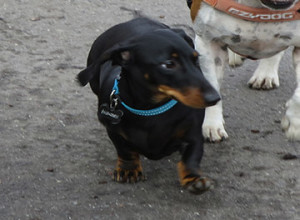 Coming from Texas (me) means that I am involved in many dog industry projects, and of course my passion is Hunting dogs. So for the uninitiated it might seem strange that we are talking about the garden variety Dachshund on a hunting site.

I will admit that I have had limited exposure to Dachshund in the hunting arena, but much more experience in training them.

For those of you who have read the home page, you will realize that dachshunds form one of the main groups of hunting dog, and their group is a stand along group. As most people will know the “sausage dog” is short legged and long bodied.

They use very good nose skills to smell (scent) their prey, then they chase and flush prey out of holes. Their name is German Dachs (badger) and Hund (dog) means that the badger was their original main prey. They have graduated to rabbits and any other burrow dwelling dog.

The original dachshunds had much longer legs, but through the generations their legs were bred shorter to allow better burrow access. With short legs and long bodies many purebred dogs suffer back problems and even paralysis later in life.

Curiously many people (including main dog organizations) place Dachshunds in their own little grouping. Their strong hunt ethic and great nose (helped by their long head shape) would have most people accept that they were descended from scent hounds, ( eg bloodhounds, pointers, Basset Hounds) etc. The other camp believe that they should be part of the terrier group (due to their great digging and love of going down holes after vermin. Still other camps put the Dachshund in the general HOUND category.

The controversy seems to lie in the fact that the Dachshund is the ONLY certifiable (FCI) breed of dog that hunts BOTH above and below ground – hence its very own category in most dog associations. Well that and the confusion as to where its ancestors came from.

The reason that I have put type so low on the page is that the Dachshund breed is so close that mostly they are delineated by size not body shape or temperament.

Most dog experts agree that they come in three types: smooth (short-haired), wire-haired and long-haired but they can also be classified by size. In the USA they are either of standard size or miniature and the newer class called Tweenie (teacup in other dog breeds). Other countries have a whole different size of ranges and names .. but they all look VERY similar and have essentially the same dna. with only slight tweaks to the chains responsible for coat length and color ..

Due to their small size and short legs, many owners think that they are protecting their dogs by not taking them for walks. But as a fearsome hunter, prone to back problems when not exercised properly, many family pet Dachshunds can become bored and aggressive to other dogs – exactly what can happen to terriers when not socialized regularly.

For a dog breed that was bred to attack and kill the fairly formidable badger, owners of Dachshunds should realize that they are being deceived by the ‘cute’ projection that they are putting on these dogs and doing them a mental and physical disservice by not walking them off lead regularly.

Like many hunting dogs they are quite intelligent, but like many terriers their independence is misinterpreted by non trainers (general owners) as stubbornness. Large lungs and boredom often result in persistent barking when left alone and not walked, which does not make for happy neighbors.

This all means that they remain a truly specialist dog, one that should not be adopted idly. Do not rescue one of these and expect them to be lounge dogs without serious side effects.

If you own one or intend to buy one, just remember they are a regular hunting dog with exercise needs, just shorter legs. Your main issue at home will be not to step on them or let other dogs bully them, as they definitely will stand up for themselves.