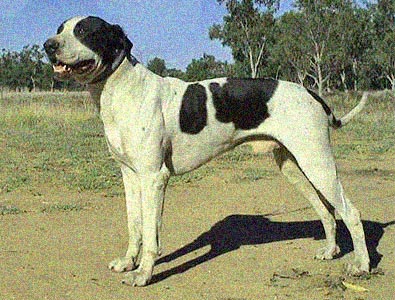 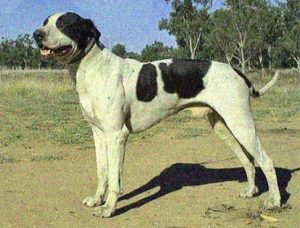 You might wonder why an American is talking about the bull arab breed built in Australia.  but if you love all the mixed breeds dogs we have talked about previously.  And you love the feist and coon dogs we in America have invented, then perhaps you will also love talking and thinking about the hunting prowess of this special purpose aussie hunter.

The one thing you will firstly find out is that there is very little American information about it, and its not a recognized AKC breed.

While this freaks some people out, you may know that many of the breeds we have today took a long time before the AKC were happy enough with breeding standards of a new breed before they were accepted.

The other thing is that the Bull arab is still breed with so many different permutations in Australia, just to get the job done, that they might have a long way to go before they become a full regular breed.

The original breed spec is believed to be attributed to “Mike Hodgens” (circa 1970s).

It was a dog  created by crossing a Bull Terrier with a German Short-haired Pointer (GSP) and a Greyhound. Later, the Bloodhound & English Pointer were added as well as a Mastiff.

Of course you will note that all of these breeds are great hunters in their own cases.  But you can also see with the original intent of the Bull arab an GSP and greyhound what they were going after.  Originally the bull terrier was used almost exclusively in Australia for pig hunting.  But some of these would go so feral with blood lust that they wrecked the pigs and endangered the hunters.  The GSP was supposed to add some size and stability, but the greyhound was an innovation.  the greyhound addition meant that you know have a dog with great eyes, that also adds speed over rough terrain to pin a pig or other big feral vermin animal down.

Greyhounds by themselves are very old breed dogs, but don’t have the weight or the robust physic to not get majorly injured when as pig tries to gore them.

You would think that the three main breeds together would form a formidable hunting dog in outback Australia but as it says adding a bloodhound for better nose in dense bush was required, The English pointer always seems like overkill to me, since it already had the GSP in it.  And again adding a mastiff while give the breed size, but will also slow it down a lot and is counter to the reason for adding a greyhound for speed.

As you can see it looks like there are many variations for the bull arab dog that have been created and will depend on the specific terrain and type of hunting that the breed is used for.  Do you want more of a pointer, a fast dog like a greyhound or a big mass like the mastiff ?

The problem for urban Australians is that during this gold rush period of experimentation, many bull arabs have been abandoned and dropped off in the southern states of Australia (far from the northern breeding grounds of the original dogs.   Like the failed experiment of wolf dogs, bull arabs come in many different sizes and temperament levels   They are not for the average urban pert enthusiast with no understanding of hunting dogs and sometimes very high prey drive.

This is a shame as many of the bull arabs are sweet dogs, that in fact have been given up because of lack of temperament for aggressive pig hunting ..  however some have gone the other way and are un-trainable.

Its a shame that in all countries around the world that dog experiments with new breeds are not more tightly regulated, resulting in better hunting dogs, and less abandoned experiments.